WI vs SA: Nkrumah Bonner suffers from concussion after getting hit on the helmet

Nkrumah Bonner, the West Indies right-handed batter, suffered from a concussion during the opening day’s play of the first Test against South Africa at the Daren Sammy National Cricket Stadium, Gros Islet, St Lucia. In the very first ball he faced, Proteas fast bowler Anrich Nortje bowled a sharp bouncer and the batter was struck flush on the helmet.

The ball lobbed up to short leg and the visitors appealed for a caught dismissal. Dean Elgar and Co took the Decision Review System (DRS), but replays showed that the ball didn’t brush the glove on its way to the fielder. Even after copping the blow, Bonner batted for 32 balls and scored 10 runs with one four before speedster Kagiso Rabada dismissed him.

Bonner didn’t take the field during the Proteas’ first innings with Kieran Powell replacing him. Cricket West Indies confirmed the concussion on their official Twitter handle. For the time being, whether or not Bonner takes a further part in the game remains to be seen.

Going by the concussion protocols, which came to the fore in 2019, match referee Sir Richie Richardson has to take a decision on Bonner’s participation in the game. Going forward, Powell can well be the like-for-like replacement for the 32-year-old Bonner.

The Caribbean team had a torrid day on the field as they were bowled out for 97 in 40.5 overs. Anrich Nortje’s four-wicket haul and Lungi Ngidi’s fifer made sure that the hosts couldn’t get past the 100-run mark. Jason Holder, their former Test captain, top-scored with 20 runs off 41 balls.

For the West Indies, Jayden Seales was the standout performer of the day. After making his international debut, he got the wickets of Aiden Markram, Keegan Petersen, another debutant, and Kyle Verreynne to end with three wickets on his first day at the highest level.

Kemar Roach got the other wicket of opener Elgar, who bagged a five-ball duck. At the close of play on the first day, the Proteas are leading by 31 runs with six wickets left in the first innings. Markram scored a 110-ball 60 with seven fours to lead the charge. 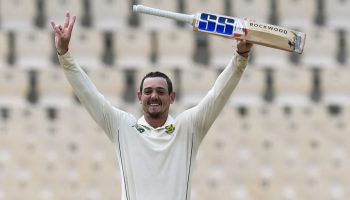