U-19 World Cup: Five Indian players to watch out for 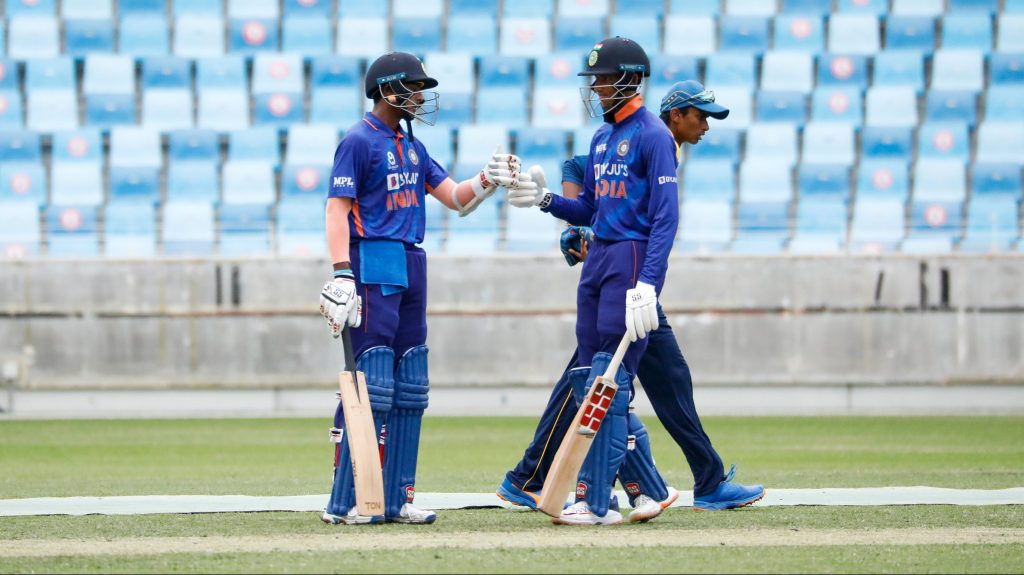 The 2022 Under-19 World Cup is round the corner and India are seeking yet another title. Having won the trophy four times before, the Boys in Blue have a great record in the tournament. In fact, prominent names like Yuvraj Singh, Shikhar Dhawan, Virat Kohli, Prithvi Shaw and many other Indian players burst onto the scenes in the Under-19 World Cup.

Hence, the Board of Control for Cricket in India (BCCI) would want the 2022 event to produce some more cricketing superstars for the nation. It must be noted that the previous edition of the Under-19 World Cup, which took place in 2020, saw India finishing as runner-ups. Hence, the team would want to go one step ahead this time around.

Meanwhile, let’s look at 5 Indian Players to watch out for in U19 World Cup:

While Raj Angad Bawa is known for his pace and hostility, Rajvardhan Hangargekar relies more on his accuracy and variations. Discipline is a crucial aspect of his bowling as it allows him to maintain a stringent line and length. He will be an important bowler in the Caribbean tracks.

The skipper of the team, Yash Dhull will be under the spotlight in the competition. The young batter is blessed with a précised technique and flair. Owing to the same, he is often tagged as the classiest batter of his lot. Not to forget, he was on a roll in the Vinoo Mankad trophy last year, having piled up 302 runs in five games at a stunning average of 75.50.

A quality all-rounder is always a captain’s delight and Shaik Rasheed might be the same to Yash Dhull. Rasheed can score runs from the outset and his recent form has been impressive as well. His leg-spin bowling can also trouble the batters big time. The all-rounder has been named the deputy to Dhull.

India U19 ride on Harnoor Singh’s ton & handy contributions from captain Yash Dhull, Rajvardhan Hangargekar & Shaik Rasheed to post 282/5 on the board against UAE U19. 👏 👏

Another player who’ll have the onus to score big runs is Harnoor Singh. The youngster will open the batting and would look to provide consistent starts to the team on the fast tracks of the Caribbean islands. Notably, in a tri-series a few months ago, he scored 191 runs from three games at an average of 63.66 and a strike rate of 83.77.

India’s bowling attack in the competition will be led by Raj Angad Bawa. The pacer belongs to the new generation of Indian fast bowlers who can set the speed gun on fire. The fast bowler might go for runs at times. However, he makes up with his ability to take wickets at any juncture of the game.