India Women played their first Test in seven years in the recently concluded one-off Test against England Women at Bristol. Although the match ended in a draw, the Mithali Raj-led side fought bravely against a strong English team. At the end, a drawn result was almost like a victory for the Indian contingent.

In this article, let us take a look at the three highest innings scores of the Indian Women’s side in Test cricket.

This team score was achieved by the Indian Women’s side in 2002 against South Africa at Paarl. India Women won the toss and batted first. And, the willow wielders made merry and pummelled the South African bowlers.

As many as five batters scored half centuries as the Indian team piled up a total of 404/9 on the board. The top scorer from India was skipper Anjum Chopra, who scored a marvellous 80. India beat South Africa comfortably with 10 wickets to spare.

India Women achieved their 2nd highest Test total against the England Women’s side and it came in 1986. Batting first, India posted a mammoth total of 426/9 in their first innings. Sandhya Agarwal was the main contributor, scoring a ravishing 132. The likes of Gargi Banerji, Shubhangi Kulkarni and Rajani Venugopal slammed half centuries as well.

England replied with a total of 350/6, with Jane Powell slamming a hundred. India Women produced an excellent performance in the 2nd innings as well, and declared with their scorecard reading 176/2. England safely negotiated 31 overs in their second innings and the match ended in a draw.

India Women’s highest ever innings total in Test cricket was achieved in the year 2002 against the England Women. India Women piled up a humongous total of 467 runs on the board, in reply to England’s total of 329 in their first innings. 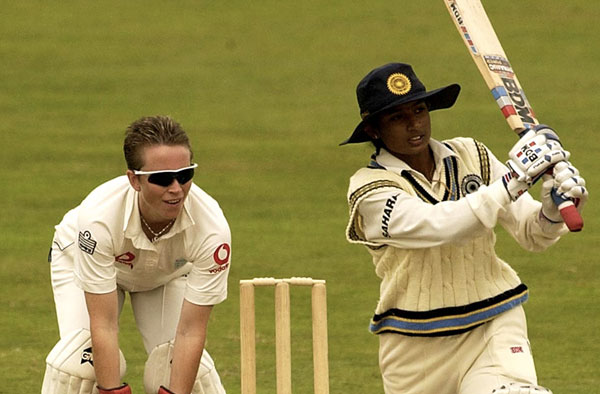 For India, legendary batter Mithali Raj was the star performer in the first innings. She scored a breathtaking double century and made the England bowlers toil. Mithali’s innings was embellished with 19 fours. England scored 198/6 in their 2nd innings and the match ended in a draw.

The rules can be a little bit reasonable for bad light: Sanjay Manjrekar