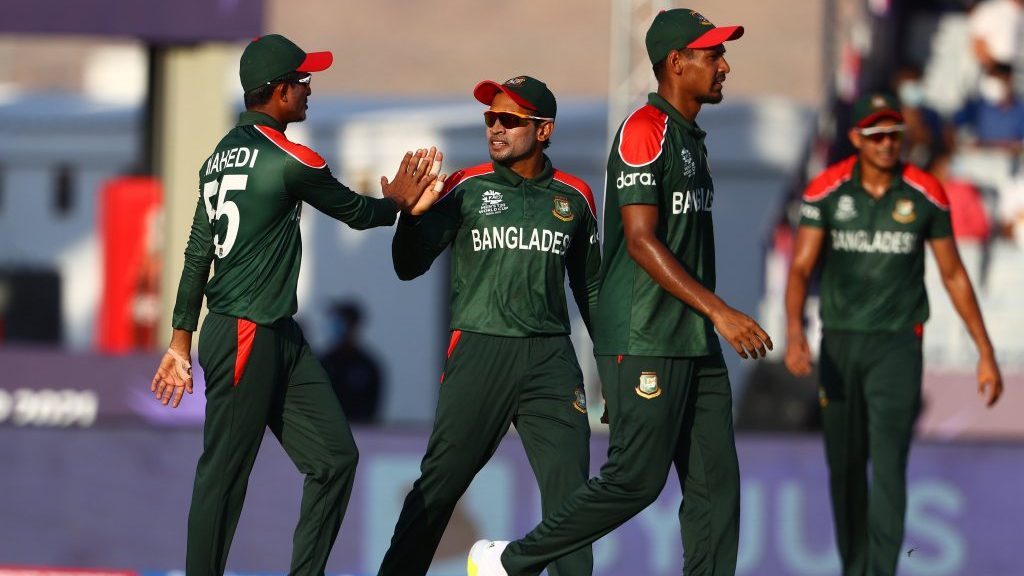 The fifth day of the T20 World Cup witnessed two teams from Group B sealing their Super 12 spots. Bangladesh defeated PNG comfortably in the first game of the day while Scotland completed their hattrick of victories to top the group.

Here’s how things panned out on Day 5:

There were doubts over Bangladesh making it to the Super 12 after their loss to Scotland. But the Mahmudullah-led side put up a strong performance to win their next two games and qualify rather comfortably. They stumbled upon Papua New Guinea in their last group game and opted to bat first after winning the toss.

Bangladesh lost their opener Naim Sheikh for a duck but then the other Liton Das scored vital 29 runs. Shakib Al Hasan continued his good run with the bat to score 46. But the real impetus to the innings was given by skipper Mahmudullah. Coming in to bat at 72/3 in the 11th over of the innings, he made sure his team finished strongly.

Mahmudullah scored 50 off just 28 balls while late fireworks from Afif Hossain and Saifuddin helped Bangladesh finish at 181/7 in their 20 overs. Papua New Guinea were no match with none of their top seven batters crossing the 8-run mark. They were struggling at 29/7 at one stage but it was Kiplin Doriga who put in a bit of a fight.

He scored an unbeaten 46 off 34 balls and PNG were eventually bowled out for 97 runs in 19.3 overs of their innings. A brilliant 84-run win for Bangladesh sealed their position in the Super 12.

Despite winning two matches, Scotland had little scope to slip up in their group with NRR of teams being very close. The hosts Oman were looking to qualify as well but after losing the toss, Scotland bowled exceptionally well to restrict them. Only three of their batters, Aqib Ilyas (37), Mohammad Nadeem (25) and Zeeshan Maqsood (34) could reach double-figures.

For Scotland, Josh Davey, Safyaan Sharif and Michael Leask picked up the majority of wickets as Oman were skittled for just 122 runs in their 20 overs. The chase was straightforward for Scotland with their top four doing the job. Skipper Kyle Coetzer finally found some form as he scored 41 runs while the rest of the three batters chipped in as well.

Scotland cantered to victory in 17 overs itself with 8 wickets in hand to top the group B and make it to the Super 12 stage in style.