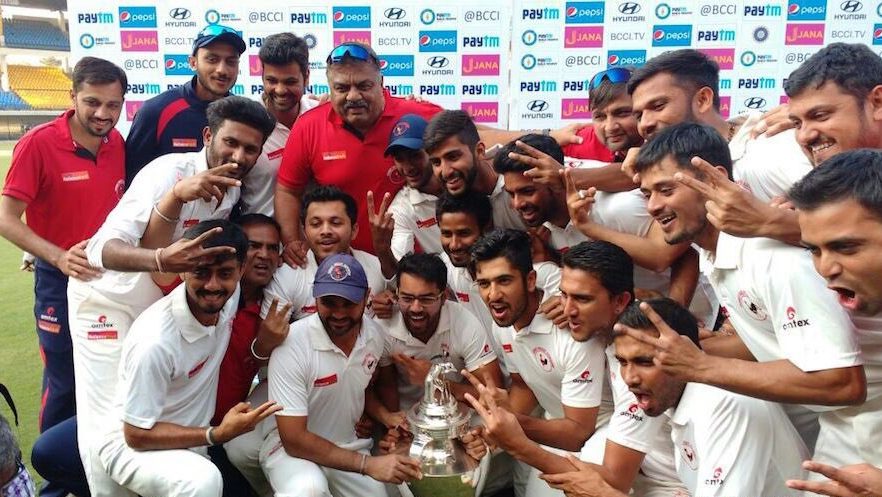 Beating a champion side like Mumbai in a Ranji Trophy final is like beating Australia in a World Cup Final. Being the grandmaster of Ranji cricket, the Mumbai team have fetched a record 41 titles under their belt. But while they were on the road for fetching their 42nd title in the final, it was Parthiv Patel’s men who broke their backs thus making Gujarat win their maiden Ranji Trophy title.

While entering into the finals, both the teams had accomplished a commanding win in the semi-finals and also were the table toppers with Mumbai at the first position and Gujarat at second. The match was played at the Holkar stadium in Indore, coincidentally being the same city where they had lost their only previous final back in 1950-51.

By winning the toss, Gujarat opted to bowl first and restricted Mumbai’s notorious batting line up to an inferior score of 228 which included two fifty-plus scores by Prithvi Shaw (71) and Suryakumar Yadav (57). In response, skipper Parthiv Patel’s 90 along with Manpreet Juneja’s 77 helped Gujarat to post a score of 328, hence making them grasp a crucial lead of 100 runs.

With Mumbai known as the gunning side, they made a scintillating come back into the game by posting a herculean third innings total of 411. Abhishek Nayar’s 91, Shreyas Iyer’s 82 and skipper Aditya Tare’s 69 were the architects, towering them almost to a sense of victory.

History has been made Champion of Raṇji Trophy 2017 is “Gujarat” and that to by winning against Mumbai. @parthiv9 #RanjiTrophy #Gujarat pic.twitter.com/CyFaUM3TDR

With history against them, Gujarat soon lost its premier and the tournament’s highest run-scorer, Priyank Panchal, for a score of 47. And with a score of 89-3, steering Gujarat to a historic win looked illusory.

But with Parthiv Patel’s grit, Gujarat’s next wicket was then jolted to a score of 205-4. His 143-run knock which was the architect of Gujarat’s successful chase had come at a time when he had kept wickets for 221 overs across innings and had also amassed a combative 90 in the first innings.

Gujarat, apart from pulling off a highest-ever successful run chase in a Ranji Trophy final, became the only team to beat Mumbai in the finals of 21st century. Apart from winning the Ranji Trophy title (2016-17), they had also surmounted the glory of Vijay Hazare Trophy in 2015-16 and Syed Mushtaq Ali Trophy in 2014-15 respectively.