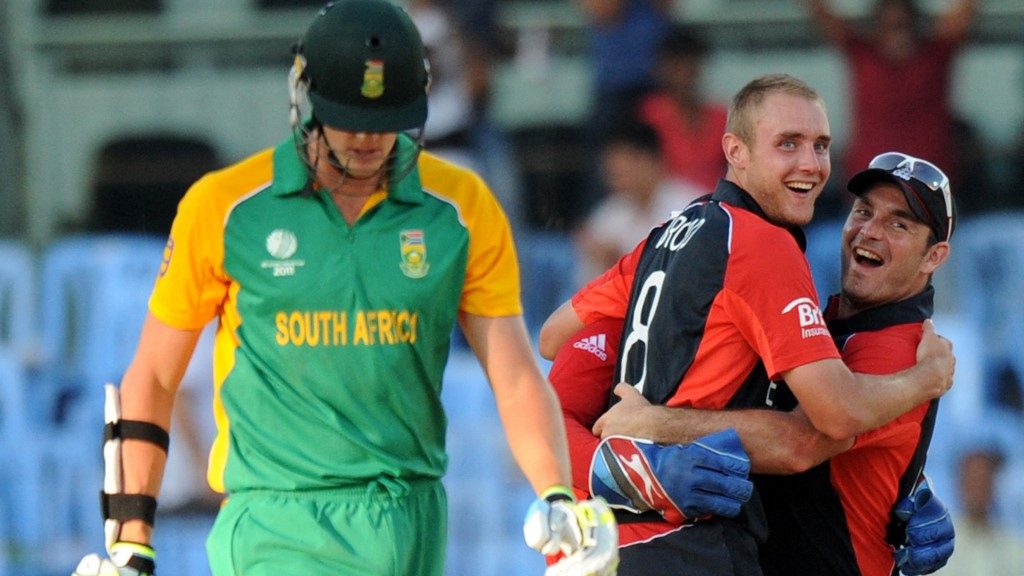 South Africa entered the 2011 Cricket World Cup, as one of the favourites to win it. England, on other hand, didn’t have the title of being the favourites to win this tournament. But, they had quite a bizarre start to the tournament. Their batting unit was pulling the weight for the mistakes committed by the bowlers. Thus, England were staring at disqualification when they came up against the Proteas in Chennai.

The MA Chidambaram Stadium produced a wicket, which would make a brilliant Test match, but neither of the teams were adapted to the slowness of the surface. England chose to bat first, but Proteas skipper Graeme Smith got Peterson to open the bowling, a plan which turned out to be a masterstroke. The left-arm spinner picked up three quick wickets to reduce England to 15 for 3. The partnership between Ravi Bopara (60 runs off 98 balls) and Jonathan Trott (52 runs off 94 balls) gave some stability to the innings and took the score past 100. When Trott got out at 114 for 4, Proteas came charging back in. This time, it was Tahir’s spell of 4 for 38 which was going to bowl out England for 171.

A target of 172 should have been a walk in the park for a batting unit equipped to play spin. England captain Andrew Strauss replicated Smith’s tactics by using the left-arm spin of Michael Yardy. But, Hashim Amla and Smith negated the threat to build an opening stand of 50 plus. At 63 for one, the Proteas seemed to be cruising. However, Stuart Broad and Graeme Swann picked up three wickets in quick succession to reduce them to 82 for 3. AB de Villiers and Faf du Plessis stabilized the innings and took the score till 124. But brilliant spells from Anderson and Michael Yardy, along with some strange running between the wickets, meant South Africa lost three wickets with no runs and lost the fourth by adding only three runs.

At 127 for 7, England were in the box seat, but then came the most seesaw passage, when the match swung from one side to another. But, Broad turned out to be the game-changer, picking up two crucial wickets, one of them was of Dale Steyn who was batting on 20. Broad ended with match figures of 4 for 15. The Proteas fell short by six runs only and Chennai witnessed one of the best ever World Cup clashes. It was the England seamers who shared even wickets between themselves to tighten the grip on the match. The two points which they got from this match, ended being crucial for them to qualify for the quarterfinals.