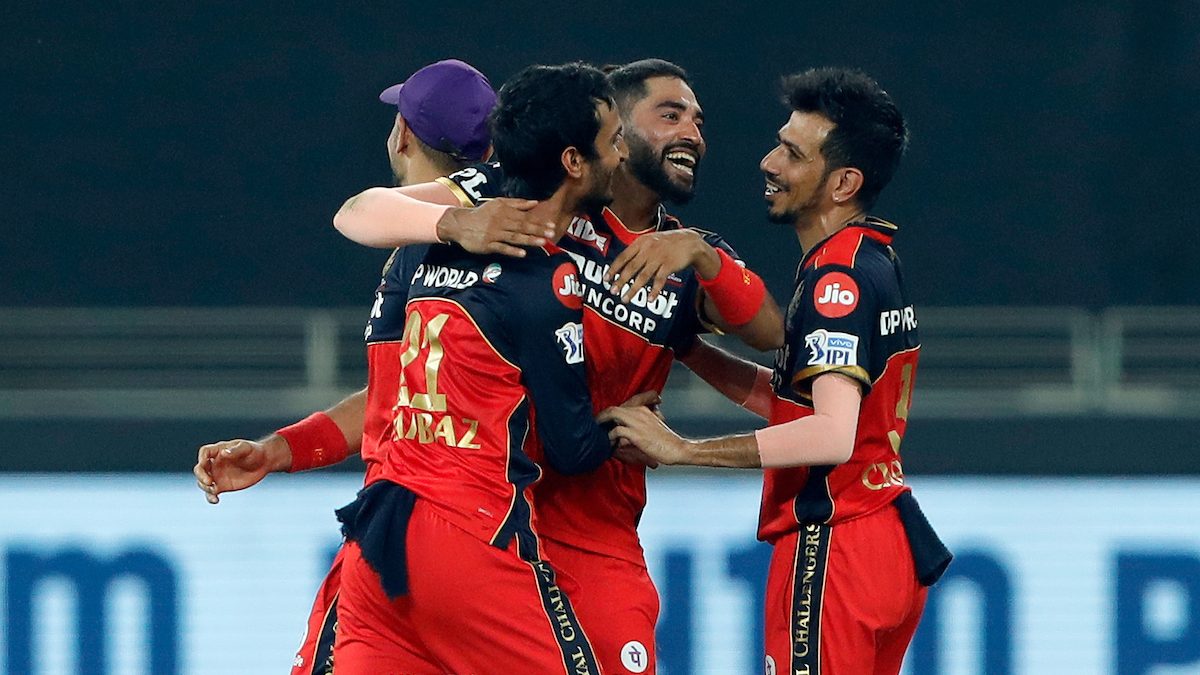 Royal Challengers Bangalore continued their good form as they defeated Rajasthan Royals by seven wickets. Bowling first RCB restricted RR for a small total which they chased down in just 17.1 overs. This was Bangalore’s seventh win in the competition in 11 games and has almost sealed their playoff position.

Earlier in the evening, Virat Kohli won the toss and elected to bowl first. The decision soon looked questionable with the Rajasthan Royals’ openers going hard early on. Yashasvi Jaiswal made 31 runs from 22 balls in a 77-run opening stand with Evin Lewis. The West Indian southpaw ended with 58 runs which formed the Royals’ base. However, it was his dismissal that started a collapse for them. 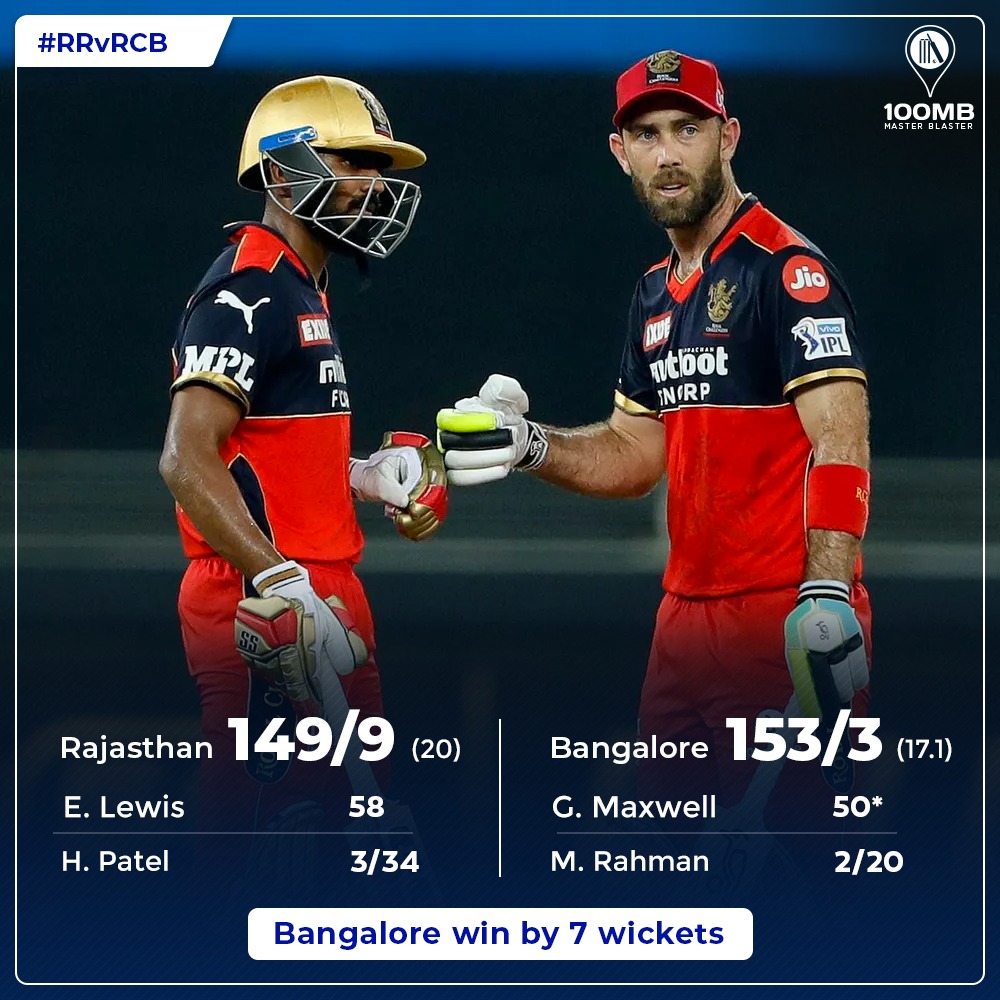 From 100-1, the Royals slipped to 127 for 6. The collapse was orchestrated by Harshal Patel who picked three and Yuzvendra Chahal along with Shahbaz Ahmed, both of whom picked two wickets each. The Royals ended on 149 for 9.

The score was always going to be too less for RCB and that is exactly how it turned out to be in the end. Virat Kohli made 25 while Devdutt Padikkal made 22. The opening stand was brisk and got RCB off to a pacy start. Once they were gone, the innings was taken over by Srikar Bharat, who made 44 runs. But, it was Glenn Maxwell who impacted with his second successive fifty, making 50 runs from 30 balls. AB de Villiers came in late just to face a ball, sweep it for a four and cap off RCB’s win.

Yuzvendra Chahal: Since getting dropped from India’s World Cup squad, Chahal has been in top form with the ball. He picked up two wickets and bowled an economical spell giving only 18 runs from his four overs. He got important wickets of Liam Livingstone and Mahipal Lomror.

Srikar Bharat: After losing Kohli and Padikkal in consecutive overs, RCB needed someone to keep them in the hunt and not lose momentum. Bharat, who has looked good every time he has batted so far, finally got some important runs. His contribution also saw a good stand of 69 runs with Glenn Maxwell. 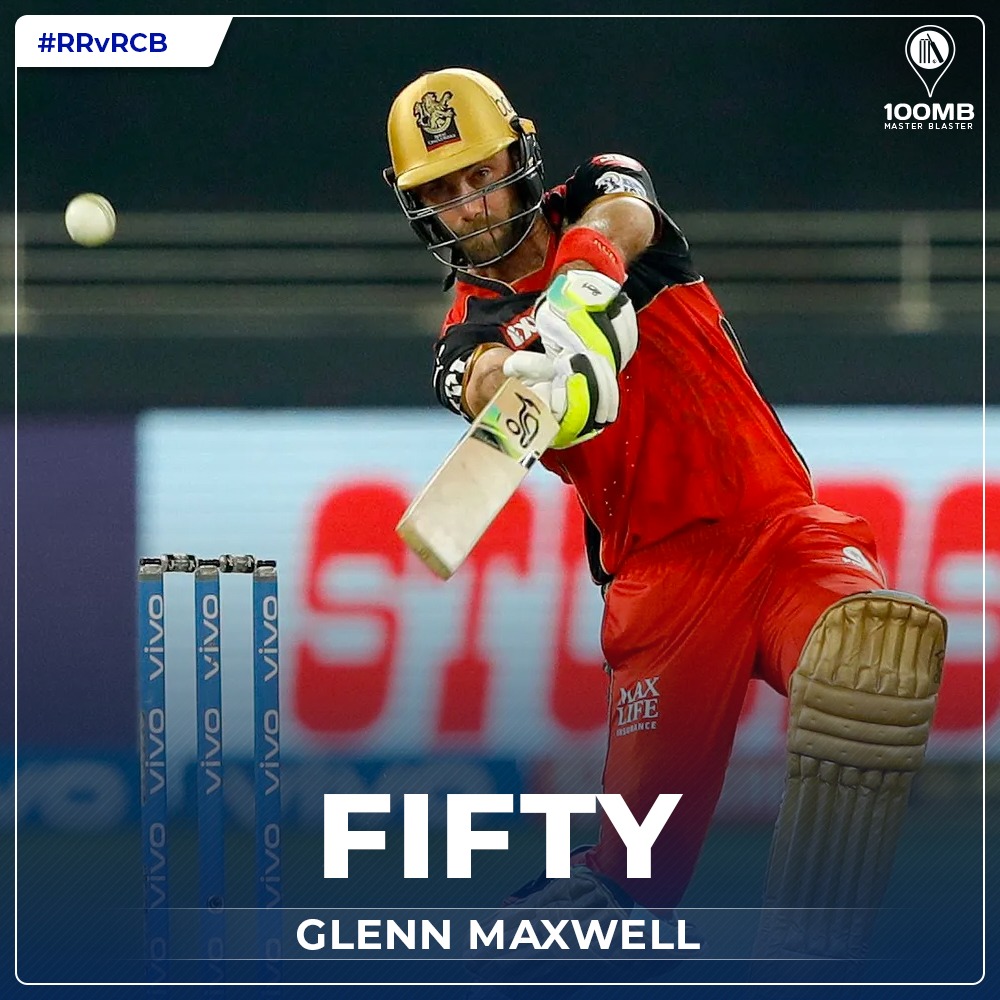 After scoring a match-winning fifty against Mumbai, Maxwell turned up with another proper performance, stamping his authority on the Rajasthan Royals. After starting with ticking off singles and doubles, he accelerated in a Chris Morris over, scoring 22 runs, which took him to a fifty.

Bangalore will now play Punjab on October 3 while Rajasthan will play Chennai on October 2.

Need to have red-ball cricket in domestic set-up too: Mithali Raj