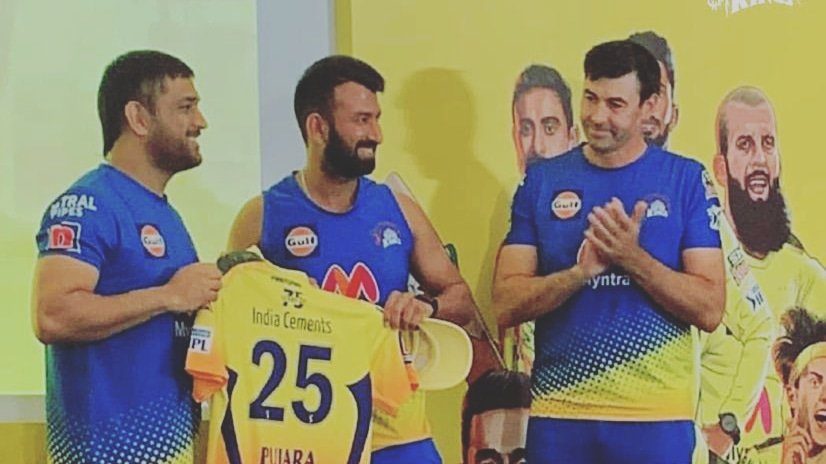 The Chennai Super Kings on Wednesday held a special ceremony for their new recruits ahead of the IPL 2021 season. The event was held in Mumbai in the presence of captain MS Dhoni. CSK will open their campaign against the Delhi Capitals on April 10th at Wankhede.

The latest recruits by the franchise, Cheteshwar Pujara, Moeen Ali, and Krishnappa Gowtham were handed the new CSK jersey. The trio received the official kits from the franchise leader MS Dhoni. The tradition of the new recruits getting their jerseys from the captain has been long followed at the franchise.

Pujara will be returning to the IPL after not being a part of any team since 2015. His last stint was with Kings XI Punjab (now Punjab Kings) in 2014. The Indian batsman uploaded a post on social media to thank CSK and captain MS Dhoni for being welcomed at the franchise. Team Chennai has been conducting their preparation camps in Mumbai, where they are scheduled to play their first five matches.

Excited and honoured to receive the official kit from @msdhoni bhai and the @ChennaiIPL family! Looking forward to a great season ahead 👍🏼#famlove #fresher #whistlepodu pic.twitter.com/XfIkzgye54

Pujara wrote in the caption of the picture which he uploaded on social media. Head coach Stephen Fleming was also seen in the picture as well while Dhoni handed the new jersey to the new players. Robin Uthappa, who was traded in from Rajasthan Royals ahead of the auction was also a part of the ceremony.

CSK had their worst season of all-time in the 2020 IPL. Having qualified to the final four in each of the seasons before that, Chennai failed to make it to the playoffs. They ended as the seventh-ranked team in the 2020 season. Coming into this year’s IPL, the franchise has added some new players. They will also have the services of Suresh Raina, who missed the previous season due to personal reasons.

Apart from Pujara, Ali, and Gowtham, CSK bought three more players at the auction of IPL 2021. Young Indian talents Harishankar Reddy, Bhagath Varma, and Hari Nishanth were bought by the franchise. But, all eyes will be on the fact whether Pujara, regarded as a Test match specialist, will get a chance in the IPL or not.

ICC announces Player of the Month nominations for March