The UAE leg of IPL 2021 is all set to kick off on September 19 where the remaining matches of the tournament will take place. In the latest turn of events, the official announcement of IPL 2021 has come wherein a short clip featuring MS Dhoni could be seen bagging all the limelight. In a short video released ahead of the IPL 2021, CSK skipper MS Dhoni can be seen sporting a funky look.

As the video starts, Dhoni talks of the second phase of the IPL 2021 which sets in from September 19. He also adds in a filmy style that the first phase was just a teaser while the actual picture will take place in the second leg. The legendary skipper of CSK, MS Dhoni, would be seen leading his yellow army yet again in the remaining matches.

It has to be noted that the first phase of IPL 2021 got suspended owing to the breakout of COVID-19 cases across camps. It was unanimously decided by the BCCI and IPL governing council that the league would be suspended and the second half will take place later. The remaining 31 matches will take place in the UAE wherein the opening match will take place between Chennai Super Kings and Mumbai Indians.

Here is the clip posted by IPL

Time to find out how this blockbuster season concludes, ‘coz #AsliPictureAbhiBaakiHai!

Flashback: The batsman who scored the first double-century against India? 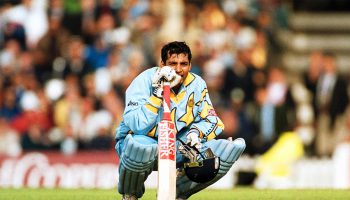