India’s cricket carnival, the Indian Premier League, resumes from 19th September in the UAE. The first half of the tournament was interrupted by the COVID-19 pandemic cases rising amongst the team camps. Now, the contingent has moved to the UAE where it had successfully hosted the IPL 2020 season without any major glitch. Alas, the migration isn’t all that simple.

The prospect of spending such a large amount of time in bio-bubble has taken a toll on few players and they have decided not to be a part of the most popular T20 league in the world. While this does cripple the franchises, it also has provided them with an opportunity to fill the gaping holes in their setups. The teams have named their replacement players on basis of their recent performances in other tournaments. Here’s a detailed team-wise breakdown of all replacements as on 14th September 2021. 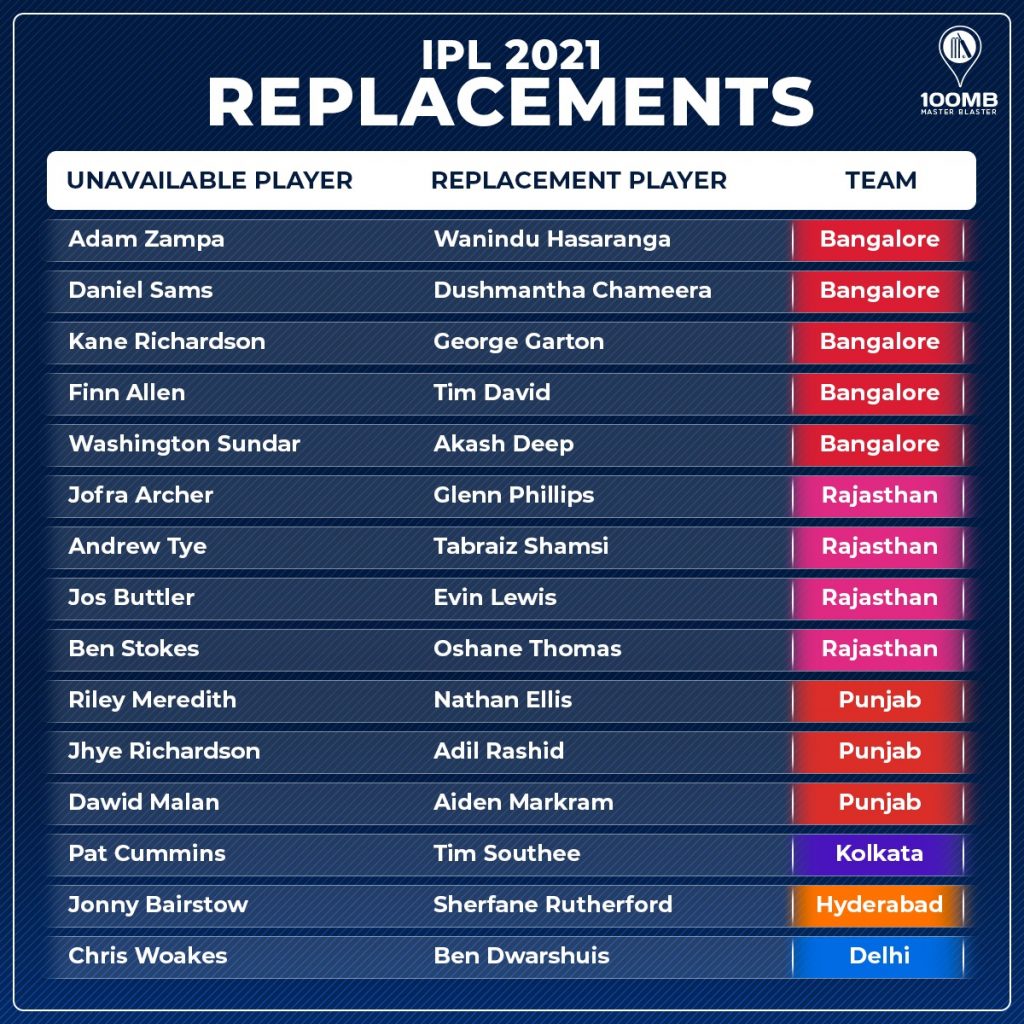 Virat Kohli’s men will be adjusting to the maximum changes in personnel. They have as many as five replacements. The Australian trio and the New Zealand opener will not be available while Washington Sundar is ruled out due to an injury. They have signed Sri Lankan leg-spinner Wanindu Hasaranga, Sri Lankan pacer Dushmantha Chameera, England all-rounder George Garton, Singapore’s big-hitter Tim David and Bengal’s Akash Deep as replacements.

Australian pacer Pat Cummins has withdrawn from the UAE leg of the IPL. KKR have brought in Tim Southee as his replacement. The New Zealand pacer has represented his nation in 83 T20Is and has taken 99 wickets.

England’s explosive wicketkeeper-batsman Jonny Bairstow will not be participating in the rest of the IPL 2021. West Indian middle-order batsman Sherfane Rutherford will take his place. Rutherford was with Mumbai Indians in IPL 2020.

Chris Woakes, another England Test player, has pulled back his name from this year’s IPL. The Delhi franchise has signed up Australian pace bowler Ben Dwarshuis as Woakes’ replacement. The 27-year old pacer is yet to represent Australia in international cricket but has put up a solid performance in the Big Bash League.

India did not respect Test cricket by pulling out of Manchester game, says Paul Newman