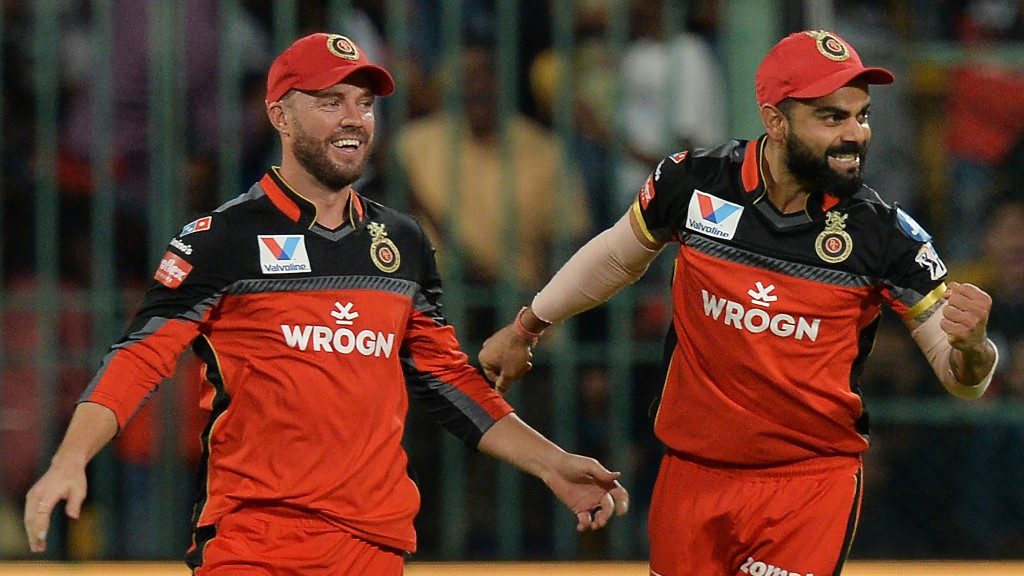 It’s not doom and gloom just yet for the Royal Challengers Bangalore in the 2021 edition of the IPL. The team, led by Virat Kohli, lost their first two games of the UAE leg, but made a comeback with a stunning victory over Mumbai Indians. On Sunday, September 26, the Challengers cemented their position at number three with their sixth win this season out of 10 matches.

They won by 54 runs in Dubai and were charged up after the game. As a part of celebration, AB de Villiers, RCB’s stalwart for more than a decade, imitated Kohli’s celebration. The 32-year-old Virat throws his hands and punches the air while showing his emotion and passion. De Villiers gave his captain a warm hug and then copied his style of celebrating inside the dressing room

Virat’s pep talk before the match, Yuzi, Maxi & Harshal talking about their performances, Coach Hess & Virat addressing the team after the match, & an AB special to sign off on a comprehensive victory, all that & more on Game Day!#PlayBold #IPL2021 pic.twitter.com/4bH4PIUeKe

RCB didn’t make the greatest of starts as Jasprit Bumrah sent back Devdutt Padikkal for the four-ball duck in the second over. Virat stated that the Challengers needed to come out of the early jolt to stage a comeback in the game. He was also amazed with the bowlers after the Challengers bowled MI out for a mere 111.

“It was a difficult start with the loss of Devdutt [Padikkal] in the second over. The way Jasprit [Bumrah] bowled that over, totally set the game up for MI. It was important from thereon for us to stamp our presence in the game and take a little bit of risk,” Virat said after the game.

“I thought we got par, 166 is par here, still felt like 10-15 more with the way we bowled. 8 for 30 was unbelievable against such a strong batting lineup,” he stated.

Kohli also showed faith in Daniel Christian, who is among the travelling reserves for Australia in the 2021 T20 World Cup. Though he went for 21 runs, Kohli reckoned that his slower balls could come in handy.

“I had a chat with AB and Maxi, they told me to go with my gut feel. My gut feel said DC [Christian] is an experienced campaigner, he still has got a slower bouncer in there which could be a wicket-taking option,” Virat added.