With a 3-match series against India starting October 2, a revamped South African Test side will begin their quest for the ICC World Test Championship. Both India and South Africa have played riveting Test cricket over the years. Some moments have made a lasting impact on the game and cracked a few record books as well. In our last recap, we took you through one such memorable innings, Mohammad Azharuddin’s fastest Test ton. In this one, we’ll take you down memory lane with one of India’s historic knocks played by none other than Virender Sehwag.

A ‘see-ball-hit-ball’ kind of a batsman, Virender Sehwag’s biggest strength was his ability to play fearless cricket. It didn’t matter who the opponent was, which bowler he was facing, what ground he was playing on or what the conditions are. Sehwag was one of the few batsmen who batted on impulse, yet ended up becoming one of the greats of Indian cricket. Whether it was the first ball of his innings or the one that got him to a hundred, Sehwag had the same answer to every delivery – dispatch the ball over the boundary!

Both teams were playing the first of the three Tests at the MA Chidambaram Stadium in Chennai. South Africa won the toss and opted to bat first on a batting beauty. Thanks to Hashim Amla’s brilliant 159 and Neil McKenzie’s 94, the Proteas ended up piling 540 runs on the board.

India needed to start strong against South Africa’s humungous total, which they did with. Wasim Jaffer scored a 73 to accompany Sehwag and both batsmen racked up a 213-run opening stand. While Jaffer missed out on a deserving ton, Sehwag in his trademark style continued taking the bowlers to the cleaners.

Having scored 52 runs on Day 2, the Delhi batsman went on to smash 257 runs in record time. Sehwag brought up his 300th run off 278 balls, recording the fastest triple hundred in Test cricket. No other batsman apart from him had scored a triple ton in less than 300 balls. On Day 4, Sehwag’s swashbuckling knock ended on 319, which became the highest individual score for India in Tests. Batting in sweltering heat for a total of 530 minutes, he registered 42 fours and five sixes in his record-breaking innings. 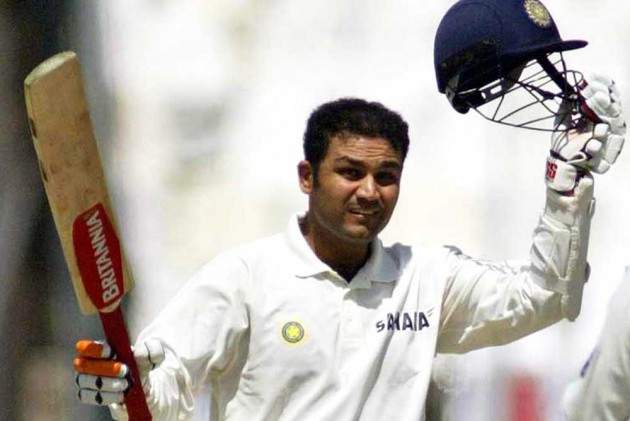 This was the second triple hundred of Sehwag’s career, which made him the first Indian batsman to achieve the feat. He was also the third batsman in the world to do so (West Indies batsman Chris Gayle later became the fourth one to do it).

Besides Sehwag’s explosive knock, Rahul Dravid also hit a magnificent 111 to cross the 10,000-run landmark in Test cricket. India were bundled out for 627 and South Africa went on to declare on 331/5 in their second innings. This time, it was McKenzie who took charge with a solid 155 to his name. This historic Test ended in a draw but Sehwag’s heroics ensured the match made its way to the record books of Indian and world cricket.