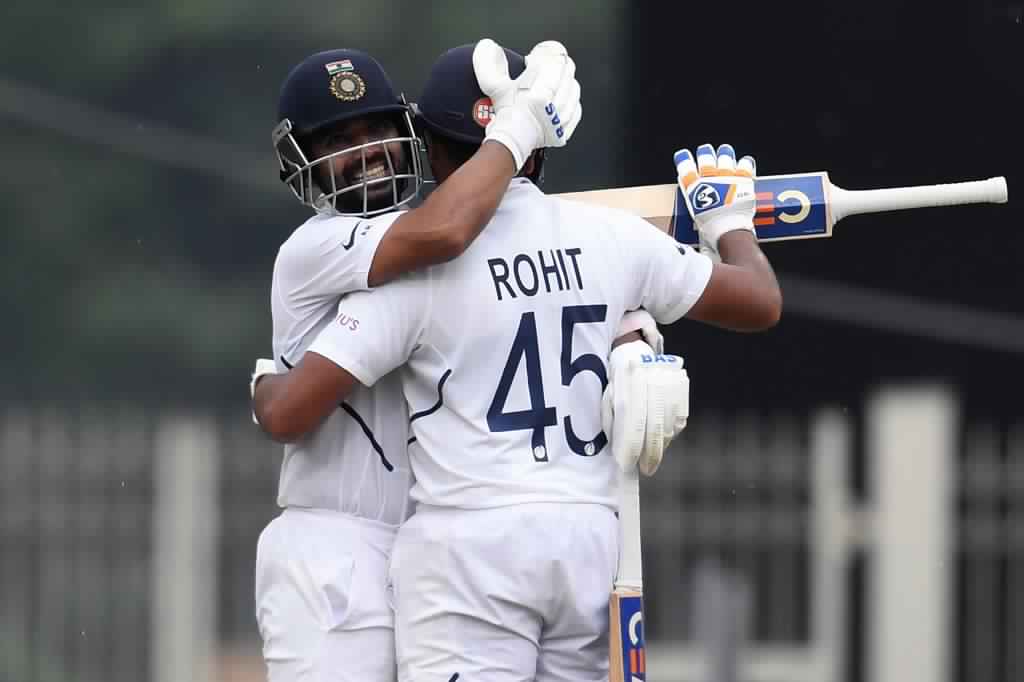 Opener Rohit Sharma scored his sixth Test century, third in this series, alongside Ajinkya Rahane’s 83* to guide India to 224/3 on Day 1 of the third Test at Ranchi. The South African pacers struck early to remove three Indian batsmen but had no answers to the Rohit-Rahane counterattack. Bad light stopped play in the third session and it was followed by rain. With no further play possible, early stumps were called after just 58 overs of action.

Faf du Plessis’ idea of taking a proxy captain (Temba Bavuma) to call the toss yielded a result no different. The Proteas lost their 10th successive coin toss in Asia and once again, India opted to bat first. But it wasn’t the typical start that the hosts would’ve hoped for. The wicket had something in for the fast bowlers and Kagiso Rabada ensured he did everything right to take advantage. The spearhead drew first blood in the fifth over, drawing a sharp edge off Mayank Agarwal (10) in the slips.

Rabada then struck again in the ninth, trapping Cheteshwar Pujara plumb in front to send the batsman packing for a duck. This time, it was his inswinging delivery that did the trick as Pujara tried to defend it with a huge gap between his bat and pad. The umpire didn’t seem convinced but du Plessis reviewed it successfully.

It wasn’t too long before India lost their captain Virat Kohli, who was just settling in with a couple of boundaries. The 16th over witnessed Anrich Nortje dismissing the dangerous Kohli to register his Test wicket. The pacer set up Kohli with a sharp delivery that nipped back in, chaining the Indian skipper to the crease. Kohli, not convinced with the umpire’s decision, went for the review but to no avail. This was the Indian captain’s ninth consecutive unsuccessful review as a batsman. The last time he reviewed correctly was against Sri Lanka in 2017.

With three big wickets in the first session itself, South Africa were riding high on confidence. Little did they know that a T20 carnage in Test cricket was about to unfold. At 39/3, the Indian vice-captain Ajinkya Rahane joined Rohit Sharma, who was stranded at one end as he watched India’s top order crumble. Both batsmen saw off a crucial passage of play just before lunch without taking any risks. But once they walked out post-lunch, their counterattack was the only order of play. Rohit yet again took the attack to off-spinner Dane Piedt, while Rahane impressed with his quick scoring. At one point, it looked like Rahane would get to his fifty even before Rohit.

It was Rohit’s day after all. The opener hung around patiently, defending the good deliveries and dispatching the bad ones. With Rahane looking in good touch on the other side, he made sure to keep the scoreboard ticking. In the process, he also notched his third hundred in four innings and completed 2000 Test runs. And as if a tribute to former opener Virender Sehwag, he got there with his trademark six down the ground.

Here are the records he made his own on the way:

From having three early scalps in their kitty to witnessing a 185-run stand between Rohit and Rahane, South Africa were once again left starring down the barrel. With play scheduled to begin 30 minutes earlier, they’d be hoping to break this solid partnership. As for Rahane, he’s inching closer to another masterfully constructed Test hundred.

Read: Should Rohit Sharma be India’s next Test opener