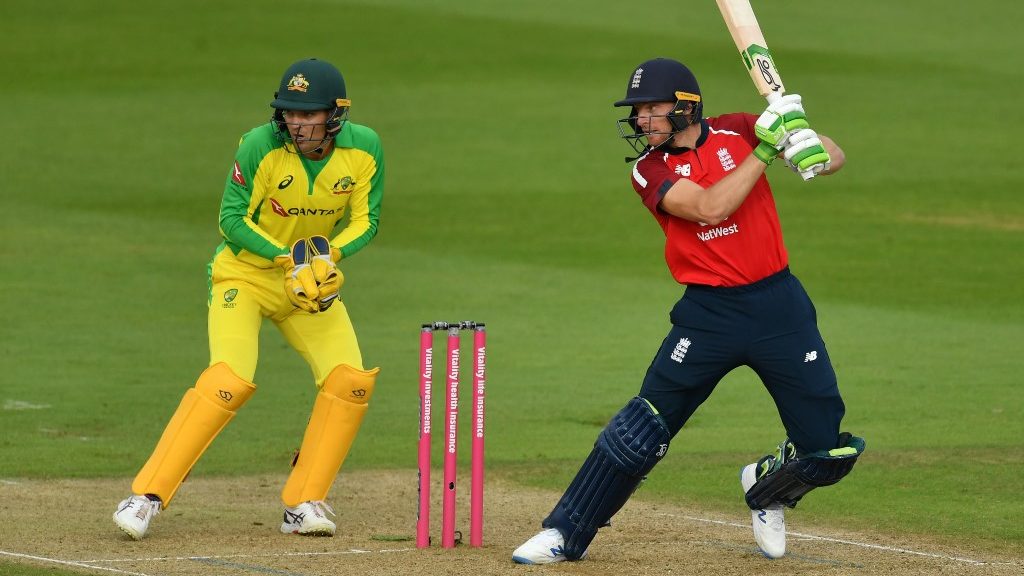 Jos Buttler’s unbeaten knock of 77 helped England surge to an unassailable 2-0 lead in the three-match T20I series against Australia. A disciplined bowling effort from the hosts saw them restricting the Aussies to 157/7 at The Ageas Bowl, Southampton. With the opening batsman unbeaten, England overcame the target with seven balls and six wickets to spare. The victory takes England to the number one position in T20I rankings, although they are tied on points with Australia.

Australia enjoyed a solid opening partnership in the first match with David Warner and Aaron Finch posting healthy scores. Jofra Archer had a different plan in this game. A sharply rising delivery managed to touch Warner’s gloves as the opener returned for a duck. Mark Wood dismissed Alex Carey in the next over to leave Australia at 3/2. Captain Morgan ran out Steve Smith to put Australia under pressure. Finch then staged the recovery with Marcus Stoinis. The duo added 49 runs for the fourth wicket. Chris Jordan bowled Finch to get England back in the game. At 89/5 in 13 overs, Australia were under a serious threat of not posting a substantial total.

Glenn Maxwell, batting at number six, found an able ally in Stoinis. The duo resurrected the Australian innings with their partnership of 43 runs for the sixth wicket. Both fell in their 20s but with Cummins striking 13 off 5 balls, Australia managed to post 157/7 in 20 overs. Jordan picked up two wickets while three other bowlers picked one wicket each.

Opener Jonny Bairstow played a scratchy innings of 9 runs from 11 balls. Just when he looked confident, he stepped up on his own stumps after having a go at one of Mitchell Starc’s deliveries. Dawid Malan, who has been in an excellent form, provided great support to Buttler. With the opener striking the ball as finely as ever, the pair raised a stand of 87 runs for the second wicket. With the victory at the doorstep, Malan fell for 42 runs off 32 balls.

Twist in the tale

Malan’s dismissal was closely followed by that of Tom Banton. One over later, Morgan smashed the ball straight to Maxwell. Three quick wickets provided Australia with a glimmer of hope. England needed 18 runs of their last two overs. Adam Zampa stepped up to bowl the penultimate over. Moeen Ali smashed a six and a boundary to firmly secure the game for England. Buttler delivered the win with a six on the fifth ball to complete a series win. These two teams will meet for the final T20I on Tuesday (8th Sept) at the same venue.

That’s how you win a game 💪

A fantastic performance from the lads to seal the series!#ENGvAUS pic.twitter.com/yyaQAHSdWB

Down the drain: 5 disappointing big buys in IPL history