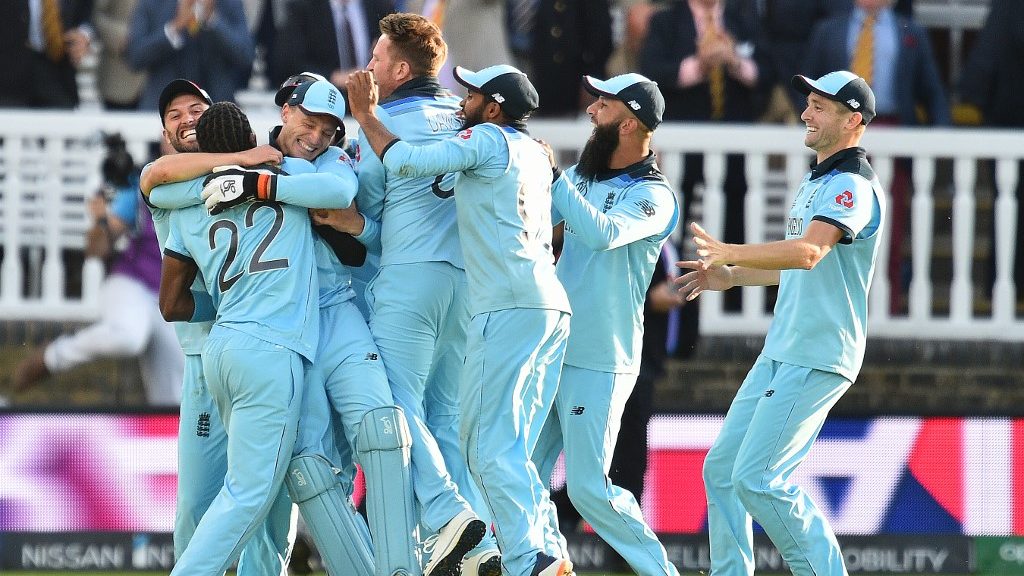 On this day in 2019, England won their maiden World Cup at home after a stunning and the most astonishing final in World Cup history. They defeated New Zealand in the first-ever Super Over of a 50-over World Cup by..wait for it….boundary count.

Kiwis battle it out in tough conditions

Opting to bat first on a green pitch with cloudy overhead conditions was certainly a bold call by New Zealand captain Kane Williamson. Martin Guptill went on the offensive, taking the attack to the English bowlers. But a bad review call brought an end to his innings, just when it seemed that he would finally come good in the tournament and then the skipper walked in.

England put the choke on

Just when it looked like New Zealand were taking command, England struck back, carrying out a choke job to perfection. Williamson and Nicholls had established a partnership of 74 and a competitive score of over 275 was well on the cards. But Liam Plunkett’s spell in the middle was crucial as the veteran pacer pitched the ball up and got some movement out of the wicket. He got rid of both Williamson and Nicholls which put the brakes on the New Zealand innings. The Kiwis never recovered from this. They stumbled home to a score of 241-8 in their 50 overs without ever activating top gear. The score though seemingly not enough, kept them alive in the contest.

England battle it out against swing

When the ball swings around, there is no better exponent in world cricket than Trent Boult. The left-arm pacer brought the ball back into the two right-handers, with Matt Henry providing brilliant support from the other end. The two pacers were unlucky as they should have ideally had a couple of wickets to their names in the first few overs. Henry finally got the breakthrough getting the scalp of Roy with the score on 28-1. This kept the contest on a double-edged sword with the Kiwis firmly alive.

New Zealand bowled some tight middle overs, while regularly getting some crucial breakthroughs. Joe Root never looked comfortable at the crease, finally being dismissed by Colin de Grandhomme on 7 off 30 deliveries. Bairstow soon followed suit, being bowled by Ferguson on 36. Jimmy Neesham also proved to be a partnership breaker, getting rid of skipper Morgan on 7, with the Three Lions reeling on 86-4.

Heading down the wire

With two of the greatest strikers in world cricket in Ben Stokes and Jos Buttler, the match was always set to go down the wire. Buttler and Stokes put up a partnership of 110 which ensured that the match would go down to the very last delivery. Even after Buttler was dismissed for 59, Stokes saw England through till the very end. His innings of 84 ensured that the world would witness the first-ever Super Over in a World Cup final. Needing two runs off the final ball, Adil Rashid was run-out which meant that history was being created right in front of our very eyes.

It’s a Super Over!

England batting first, opted to go with the power of Ben Stokes and Jos Buttler. Stokes got a crucial 3 and a boundary whereas Jos Buttler gave England the momentum with a boundary to finish off their innings with 15 runs on the board.  For New Zealand, Kane Williamson yet again pulled off something out of the extra-ordinary by sending in Jimmy Neesham to bat alongside Martin Guptill. Jimmy Neesham struck a massive 6 off Archer’s length delivery on the leg side and that gave New Zealand the right momentum going forward.

New Zealand needed 2 off 1 ball and Archer was under huge pressure. Guptill tucked a leg-side delivery to deep square leg and some great awareness from Jos Buttler, who came in front of the wickets to collect the throw ran out Guptill. It was Buttler, touted as the next superstar to emerge out of England’s white-ball overhaul since the 2015 World Cup, who gave New Zealand their greatest heart-break yet and sealed England’s greatest joy in their long cricketing history.