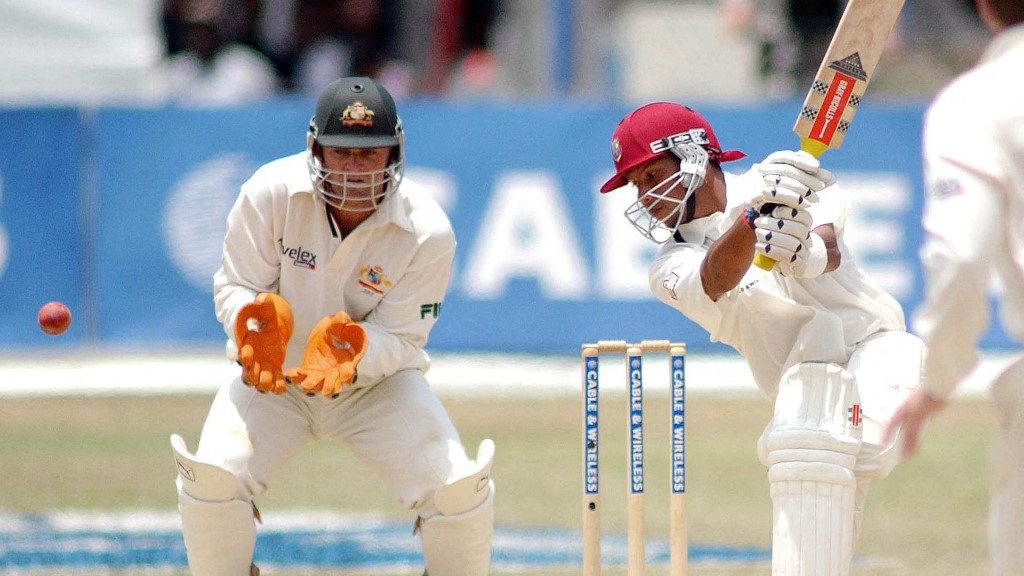 Ramnaresh Sarwan was a pivotal member of the West Indian batting line-up for more than a decade. The right-handed batsman featured in 87 Tests, 181 ODIs and 18 T20Is for the West Indies. While Sarwan scored 5842 runs in the whites at an average of almost 40.00, he also plundered 5804 runs in the ODI format of the game at a good average of 42.06. He also scored 298 runs in T20Is.

As Sarwan celebrates his 41st birthday today, let us take a look at the top 5 knocks of Ramnaresh Sarwan in international cricket.

Ramnaresh Sarwan’s brilliant century against England at Sabina Park helped the West Indies thrash the visitors by an innings and 23 runs in February 2009. England batted first and were bowled out for a total of 318. In reply, it was the scintillating 202-run partnership between Chris Gayle and Ramnaresh Sarwan that was the highlight of the West Indian innings.

Sarwan played a patient innings and scored a 290-ball 107. His innings was filled with 10 boundaries. And, the right-handed batsman kept the likes of Ryan Sidebottom, Andrew Flintoff, Steve Harmison and Stuart Broad at bay. England were bowled out for a paltry 51 in the 2nd innings, as Jerome Taylor scalped a five-wicket haul.

In a low scoring thriller, it was Ramnaresh Sarwan’s magical knock that helped the West Indies beat India by a slender margin of 1 run on 20th May 2006. Batting first, the West Indies scored 198/9 in 50 overs. And, 98 of those runs came from the willow of Sarwan. He held the innings together in a vigil that lasted 138 deliveries. In fact, the next highest run-scorer after Sarwan for the ‘Men in Maroon’ was Carlton Bough, who scored 21 runs.

India too produced a poor performance with the bat. And, except Yuvraj Singh, who scored 93, none of the Indian batsmen could cross the 30-run mark. The Indian side was bowled out for 197 and fell short of the target by just 1 run.

In another nail-biting ODI match between India and the West Indies in the year 2006, Ramnaresh Sarwan kept a cool head to steer his side to victory. India batted first and scored 245/9, with Virender Sehwag scoring a blistering 97 off 83 deliveries. The West Indies were reduced to 31/2 in reply.

But then, Ramnaresh Sarwan stood up for his side. He scored a masterly 119-ball 115* and put on a match-winning partnership of 106 runs for the 5th wicket with Shivnarine Chanderpaul. His unbeaten century allowed the West Indies to overhaul the Indian target with 4 wickets and one ball to spare. Clearly, Sarwan was the last man standing for his side.

This Test win against Australia will go down as one of the greatest victories in West Indian Test history, and Ramnaresh Sarwan had an important role to play in it. Australia batted first and scored 240, and the West Indies replied with the exact same total. Led by a scintillating opening partnership of 242 runs between Justin Langer and Matthew Hayden, Australia scored 417 in the 2nd innings and set the West Indies a near-impossible target of 418 for victory.

And, Ramnaresh Sarwan allowed the West Indies to post a mind-boggling win. He scored 105 off 139 deliveries and took the attack to the opposition. His innings was embellished with 17 magnificent boundaries. Sarwan put on a match-winning partnership of 123 runs for the 5th wicket with Shivnarine Chanderpaul, who scored 104. And, Sarwan’s splendid knock helped West Indies chase down the mammoth target with 3 wickets to spare.

The greatest knock of Ramnaresh Sarwan’s international career came in the year 2009 against England at Barbados. England batted first and posted a mammoth total of 600 on the board. And, the West Indian innings was all about Ramnaresh Sarwan. The veteran batsman scored a masterly 291 off 452 deliveries. In fact, when the West Indian scorecard read 334/5, there was a small opening that the England team might have sensed.

But, Sarwan shut that opening once and for all as he put on a sensational 261-run partnership with Denesh Ramdin, who scored 166. Sarwan’s double century helped the West Indies post a total of 749/9 in their first innings, and the match ended in a draw. Sarwan was awarded the Player of the Match award for his ravishing knock with the willow in hand.

Topping Tests: Three teams that have won the ICC Test mace the most times

India won’t be able to bowl New Zealand out in the second innings: Sunil Gavaskar