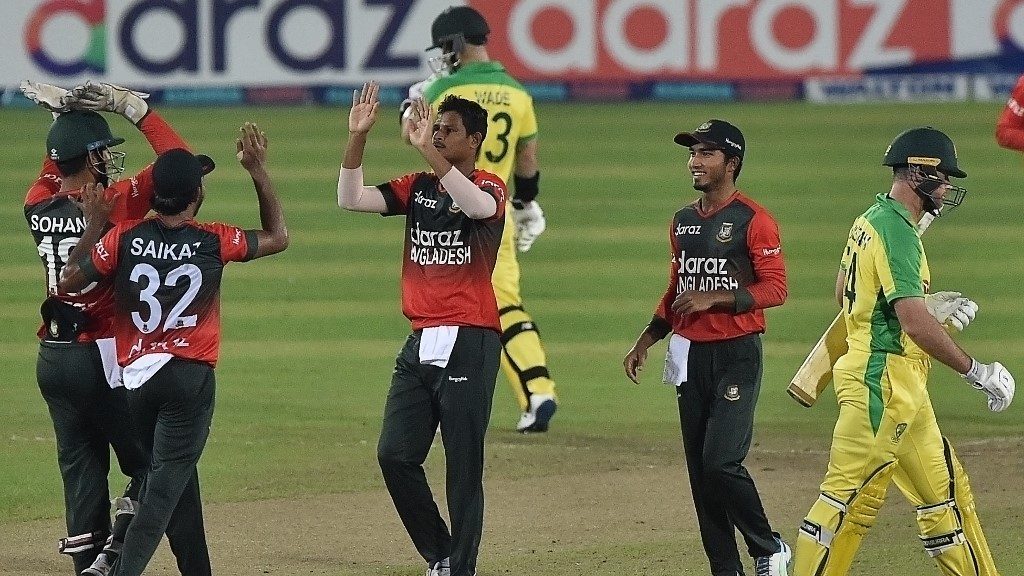 Bangladesh scripted history by defeating Australia 4-1 in the recently-concluded T20I series at home. It is indeed a major achievement for the Bangla Tigers with the Aussies being one of the powerhouses of world cricket. Although one can argue that the visitors didn’t have many of their key players, the scoreline of 4-1 shows Bangladesh have outplayed the Men in Yellow.

Notably, it was a low-scoring series where bowlers did most of the talking. All five games took place at the Shere Bangla National Stadium in Dhaka and the highest score recorded was 131/7 by Bangla Tigers in the first game. This shows how the track has played and the hosts embraced the challenge with brilliance. This victory would boost Bangladesh’s morale ahead of the T20 World Cup. On the other hand, Australia needs to work on its bench strength.

Nasum Ahmed has indeed been a find for Bangladesh this series. The left-arm spinner showcased his prowess and made perfect utilization of spin-friendly conditions. He, in total, took eight wickets in five games with his best figures reading 4/19. Not to forget, he bowled at an economy rate of just over five.

Josh Hazlewood in this T20I series against Bangladesh so far:-

He picked 6 wickets in 3 games, his economy rate is just 5.55 in this series so far. He is one of the most consistent bowler in this Generation. #BANvAUS pic.twitter.com/75wMbqVo9W

Although nothing much went Australia’s way this series, Josh Hazlewood enjoyed a sensational run. The right-arm pacer constantly troubled the batters with his challenging deliveries. Besides restricting the scoring rate, he also picked wickets regularly. In total, he scalped eight wickets in four games with his economy rate being below 6.

The Bangladesh pacer unleashed his best in the series as no Aussie batter could tackle him with precision. Be it taking wickets with the new ball or controlling the run flow in death overs, Rahman rose to all the challenges. In total, he scalped seven wickets in five games at a jaw-dropping economy rate of 3.53. Remember, these figures are from a T20I series.

The Aussie all-rounder has been on a roll in recent times and many prominent experts have hailed his remarkable consistency. In a low-scoring series, Mitchell Marsh got runs in almost every game. He was the highest run-scorer in the series, having slammed 156 runs in five games. Marsh also bowled some impressive spells.

Congratulations to .@Sah75official who became the first player in T20I history to score 1000 runs and take 100 wickets during the 5th T20I against Australia.#BCB #RiseOfTheTigers pic.twitter.com/f8qYLOrJT1

The veteran Bangladesh all-rounder shone in all three departments and was instrumental in taking Bangladesh to the historic series win. Shakib scored 114 runs in five games, most for any Bangladesh player. If that’s not enough, the left-arm spinner also scalped seven wickets in five games. As a result, Shakib Al Hasan also received the Player-of-the-Series award.