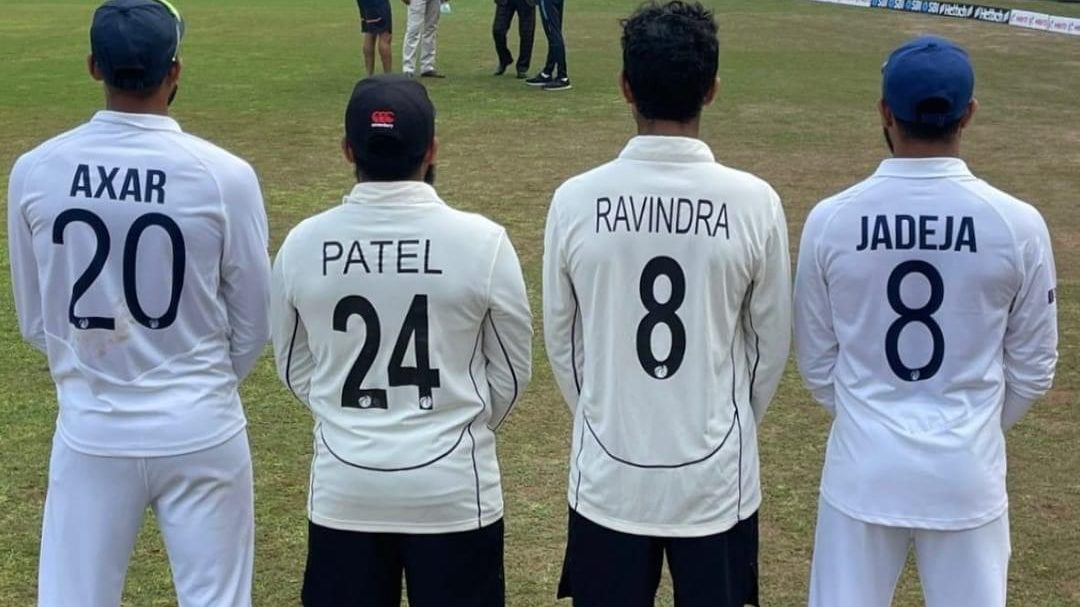 If there had to be one thing that could have brought great happiness to the Indian side after their dismal T20 WC run last month, it stands to their Test victory which they registered over New Zealand in Mumbai. After winning the T20I series in style, India went on to win the Test series (1-0) by pulling off a brilliant victory at Wankhede by 372 runs.

India’s ace spinner Ravi Ashwin who was also awarded as the player of the series took to his IG story to share a happy post. In the picture shared by Ashwin, Axar Patel, Ajaz Patel, Rachin Ravindra, and Ravindra Jadeja stood in line with their back towards the camera. The interesting thing among these four players is they share common either last or first names with each other. The players stood in a fashion where their names on the jersey completed in making a beautiful chain.

Talking of the match, India bagged a massive victory and continued their winning streak wherein Ashwin was awarded as the player of the series due to his heroics in both games. In the second innings of New Zealand too, the off-spinner was instrumental in wrapping up the visitors real soon.

Jayant and I have trained together: Ravi Ashwin

“I think I’ve got 10 (Player of the Series awards now). I enjoyed Wankhede honestly, and every day there was something new, and I could challenge both edges. It was a wonderful performance by Ajaz. It doesn’t spin all the time in Wankhede, and he used the seam and put the ball in the right places, and there was a bit of destiny involved in his 10-for too.”

“Jayant and I have trained together, he flew to Chennai from Haryana in 2014 to pick my mind, so we have a good relation. Axar and I have played since Kings XI. I would like to go to South Africa and win a series there, we haven’t done that before, and hopefully, we can do it this time,” said Ashwin after India’s resounding victory.